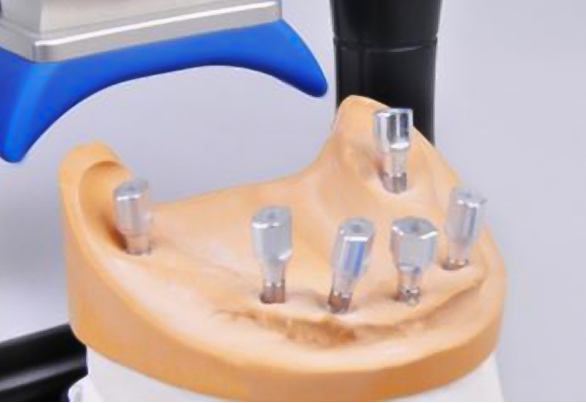 During the preparation stage, dental technician in the dental lab used 6 scan bodies, and fixed them onto analogs inside the plaster model with a screwdriver. The artificial gingiva on the model would be removed to check whether the connection parts were put in place or not.

When the scanning step was performed with scan bodies, the artificial gingiva was removed to ensure that scan bodies were put in place completely.

After the preparatory work was finished, the upper and lower occlusion models, the jaw model, the working model with artificial gingiva and the working model with scan bodies were scanned successively using SHINING 3D’s DS300 scanner under the guidance of its self-equipped 3D scanning software DentalScan. When the upper and lower occlusion models were being scanned, a special occlusal fixture equipped for DS300 was used. The mark points on the occlusal fixture could be used for identifying the spatial position of the model, thereby transferring the positional relationship into the CAD design software.

The scanning operation is performe by the user according to the prompts of SHINING 3D’s scanning software DentalScan.

After the 3D scanning data were obtained, the prosthesis was designed by Spanish technician Waldo Zarco Nosti using Exocad. Within the design software, the technician selected the CAD data scan bodies corresponding to the platform size of the implant data and aligned them with the scan body section of the scanning data successively to accomplish the best matching. This alignment step is extremely critical, because it would directly determine if the upper structure could achieve”passive fit”.

The optimal fitting function within exocadcan realize the best result by using CAD data of scan bodies in the database to align with scanned data.

Because the special bite relationship transfer tool of DS300 scannerwas used, the spatial relationship between the upper and lower jawmodels and the dental articulator was completely transferred into the virtual articulator within the design software.

Since the DS300 scanner’s special occlusal fixture was used, the virtual Amann Girrbach® articulator could be opened directly within the exocad design software, and the position of the digital model inside the virtual articulator was completely consistent with the position of the plaster model inside the physical Amann Girrbach® articulator. Therefore, the occlusal movement could be completely simulated within the software so as to eliminate intersections that might appear on the prosthesis during movement.

The occlusal movement is simulated by the virtual articulator in the software. intersections on the prosthesis can be displayed and eliminated directly prevent premature contact on the finished prosthesis.

Based on the complete anatomic form of the previous step, the model is cut back into the basal framework. Mesial-distal retention grooves are prepared using a carving tool.

After basal bridge design was completed, the metal bridge was milled using a five-axis milling machine. The bridge fitted very tightly on the model thanks to many factors, among which, however, the high-quality data acquired by DS300’s high-pixel camera were essential.

After processing, finish coating was completed using light-cured resin and aesthetic repair of red-white areas was accomplished to give very good results.

The processed metal support fits completely tightly on the model without tilting when tried on. Finish coating was completed using light-cured resin.

Keep up to Date